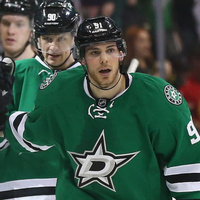 Tyler Seguin net worth: Tyler Seguin is a Canadian professional hockey player who has a net worth of $25 million. Tyler Seguin was born in Brampton, Ontario, Canada in January 1992. He is a centre who played with the Plymouth Whalers of the Ontario Hockey League. Seguin was drafted #2 overall by the Boston Bruins in the 2010 National Hockey League Draft. He played for the Boston Bruins from 2010 to 2013 and then joined the Dallas Stars in 2013 where he became an alternate captain. He won the Stanley Cup in his rookie season in 2011. He has also represented Canada in international competition and won Gold medals at the World U-17 Hockey Challenge in 2009, the Spengler Cup in 2012, and the World Championships in 2015. Tyler Seguin was selected to the NHL All-Star Game in 2012, 2015, 2016, 2017, and 2018. He won the Red Tilson Trophy in the Ontario Hockey League for being the most outstanding player. In 2018 he signed an eight year deal for $78.8 million with the Dallas Stars.