Trevor Linden net worth: Trevor Linden is a Canadian retired professional hockey player who has a net worth of $20 million dollars. Trevor Linden was born in Medicine Hat, Alberta, Canada, and excelled in multiple sports throughout his school years, including hockey, baseball, volleyball, basketball, golf, and speed skating.

He was offered a scholarship to Princeton University for both his academic work and for his ability on the ice, but he chose to play for the Medicine Hat Tigers of the WHL instead. He played in the Midget League for part of the season, before joining the Tigers junior team full time. He was the second draft pick overall at the 1988 NHL Draft. He went on to play excellent hockey for the Vancouver Canucks from 1988-1998, but a change in management led to his being traded. Between 1998 and 2001, he played for multiple teams, and dealt with a rash of injuries, before returning to the Vancouver Canucks in 2001. His level of play improved once back with the Canucks. He retired in 2008, after setting or matching multiple franchise records. The franchise chose to retire his number. In April of 2014, he became the Canucks President of Hockey Operations and alternate Governor. 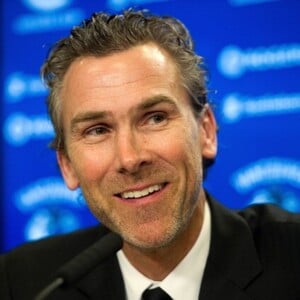