Tim Hunter net worth: Tim Hunter is a Canadian professional hockey player and hockey coach who has a net worth of $10 million. Tim Hunter was born in Calgary, Alberta, Canada in September 1960. He was a right winger who was drafted #54 by the Atlanta Flames in the 1979 NHL Entry Draft. Hunter played for the Calgary Flames, Quebec Nordiques, Vancouver Canucks, and San Jose Sharks during his playing career that latest from 1981 to 1997. He won a Stanley Cup championship in 1989 with the Flames and was known for his fierce style of play and known as an elite enforcer. Hunter became an assistant coach with the Washington Capitals in 1997 and held the position until 2002. He was an assistant coach for the San Jose Sharks from 2002 to 2008 and then was an assistant with the Toronto Maple Leafs from 2008 to 2011. He went back as an assistant coach with Washington from 2012 to 2013 and became the head coach of the Moose Jaw Warriors of the Western Hockey League in 2014. Hunter holds Calgary Flames records for most career penalty minutes, most penalty minutes in one season, and most penalty minutes in one playoff year. 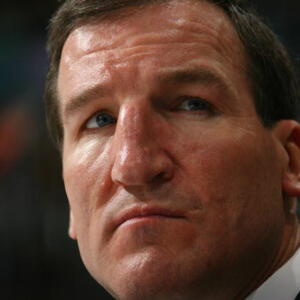