Tiger Williams net worth: Tiger Williams is a Canadian former professional hockey player who has a net worth of $4 million. Tiger Williams was born in Weyburn, Saskatchewan, Canada in February 1954. He was a forward who shot left handed and holds the distinction of being the NHL career leader in total penalty minutes.

Williams first played for the Swift Current Broncos of the WCHL. He was drafted #31 by the Toronto Maple Leafs in the 1974 National Hockey League Draft as well as #33 by the Cincinnati Stingers in the 1974 WHA Draft. Williams played for Toronto from 1974 to 1980 and then for the Vancouver Canucks until 1984. He played for the Detroit Red Wings from 1984 to 1985 and for the Los Angeles Kings until 1988. Williams also played for the Hartford Whalers in his final NHL season. He holds NHL records for most penalty minutes in the regular season and in a season including playoffs. He also holds penalty minute records for Toronto and Vancouver. His autobiography Tiger: A Hockey Story was published in 1984 and in 1987 he released a cookbook called Done Like Dinner: Tiger in the kitchen. 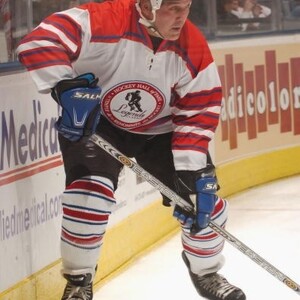