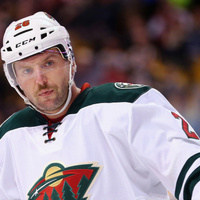 Thomas Vanek Net Worth: Thomas Vanek is an Austrian professional ice hockey player who has a net worth of $38 million. Thomas Vanek was born in Baden bei Wien, Austria, in 1984, and began his NHL career after playing with the University of Minnesota. Vanek started playing with the Buffalo Sabres during the 2005-06 season, before he was traded to the New York Islanders in October of 2013. Vanek was then shipped to the Montreal Canadiens in March of 2014. He landed a three-year, $19.5 million contract with the Minnesota Wild on July 1, 2014. Vanek was named a second-team NHL All-Star during the 2006-07 season and earned his first berth in the NHL All-Star Game in 2009. Vanek has competed for the Austrian men's national team, earning a gold medal at the 2008 IIHF World Championships in Austria. He also won gold at the IIHF World U20 Championships in 2003 in Solvenia and silver in 2002 in Austria. During the summer of 2014, Vanek was named in an investigation into a purported illegal gambling ring allegedly held at the Marina Restaurant & Bar in Charlotte, New York. Vanek has maintained his innocence and denies any wrongdoing as the investigation continues. He has three sons with his wife, Ashley, and lives in Minnesota.