Steven Stamkos net worth and salary: Steven Stamkos is a Canadian professional hockey player who has a net worth of $14 million. Born in Markham, Ontario, Canada on February 7, 1990, Stamkos is best known for his position as centre for the Tampa Bay Lighting in the National Hockey League. He stands at six feet tall and weighs in at 195 pounds.

He was the first overall pick in the 2006 draft for the Ontario Hockey League and was chosen first overall by Tampa Bay in the 2008 NHL draft. His professional career began in 2008, and since then he has been selected for the NHL YoungStars Game in 2009, received the Maurice "Rocket" Richard Trophy in both 2010 and 2012, played the NHL All-Star Games in 2011 and 2012, and was on the NHL Second All-Star Team in 2011 and 2012. He holds the records for most goals scored in a season by a Tampa Bay Lightning player, having scored sixty goals between 2011 and 2012, as well as most overtime goals in a single season by any NHL player, which totaled five between 2011 and 2012. He is currently endorses Nike, Tissot watches, Sport Chek, and Coca-Cola Zero. He holds a gold medal for the World Junior Championships in Canada in 2008 as well as a silver medal for the World Championship in Switzerland in 2009. He was recently selected to compete in the 2014 Winter Olympics in Sochi, however a broken tibia prevented him from being eligible to play. 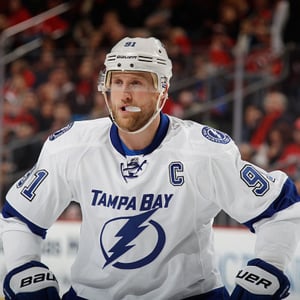