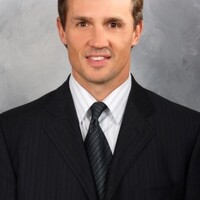 Steve Yzerman net worth: Steve Yzerman is a Canadian professional hockey player who has a net worth of $40 million. Steve Yzerman is currently retired from professional hockey and is now the general manager of the Tampa Bay Lightning. Yzerman played his entire National Hockey League (NHL) career with the Detroit Red Wings. He is a member of the Hockey Hall of Fame and has won numerous awards throughout his career, including the "Lester Be Pearson Award" for most outstanding player, the "Conn Smythe Trophy" for MVP of the Stanley Cup Playoffs in 1998, the "Selke Trophy" as the league's best defensive forward in 2000, and the "Bill Masteron Memorial Trophy" for perseverance in 2003. He was an NHL All-Star ten times, a First Team All-Star in 2000, and a member of the all-Rookie Team in 1984. On July 3, 2006 he officially retired as a professional ice hockey player, finishing his career ranked as the sixth all-time leading scorer in NHL history. Yzerman's #19 jersey was officially retired on January 2, 2007 and he was inducted into the Canadian Sports Hall of Fame in 2008. In 2006, Yzerman was named Vice President of the Detroit Red Wings. He won a fourth Stanley Cup as the Vice President of Operations in 2007-08 and served as the team's Alternate Governor until he was hired away from the Red Wings to become the general manager for the Tampa Bay Lightning in 2010. Yzerman and his wife, Lisa Brennan, have three daughters and they reside in Bloomfield Hills, Michigan. Yzerman acquired naturalized US citizenship largely because of his many years of residence in Michigan.