Simon Gagne Net Worth: Simon Gagne is a Canadian professional ice hockey player who has a net worth of $37 million. Born in 1980 in Sainte-Foy, Quebec City, Quebec, Canada, Simon Gagne began his relationship with the sport of hockey when he started playing in the QMJHL when he was just 16 years old. It didn't take too long for the Philadelphia Flyers to take notice of Gagne's skills on the ice, and the team drafted Gagne with the 22nd overall pick during the 1998 NHL Entry Draft. He was part of the NHL's All-Rookie Team after the 1999 season and is a two-time NHL All-Star from the years 2001 and 2007. He won the Pelle Lindbergh Memorial Award in the 2000-01 season, that particular award being given each season to the most improved player on the Philadelphia Flyers. He went on to win the Toyota Cup as well in 2001-02, 2005-06, and 2006-07, this award being given to the one player who earns three stars the most frequently in each season. Gagne won the Flyers' team MVP award, the Bobby Clarke Trophy, twice in 2005-06 and 2006-07. The first phase of his association with the Flyers came to an end when the team traded him to the Tampa Bay Lightning in 2010 and, a season later, he became a free agent and signed a two-year, $7 million contract with the Los Angeles Kings. He was part of the Kings' Stanley Cup championship in 2012. He played with the Flyers once more after the Kings traded him back to his original team. Gagne is currently going through training camp and the preseason with the Boston Bruins as of the fall of 2014. Gagne has played internationally with the Canadian national team, earning gold at the 2004 World Cup in Canada and at the 2002 Winter Olympic Games located in Salt Lake City, Utah. Gagne has two children with his wife, Karine. 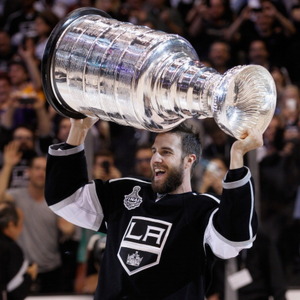