Shane Doan Net Worth: Shane Doan is a Canadian professional ice hockey player who has a net worth of $36 million. Born in 1976 in Halkirk, Alberta, Canada, Shane Doan began playing in the WHL before the Winnipeg Jets drafted him seventh overall during the 1995 NHL Entry Draft. Doan has played with the franchise ever since, though they have since been named the Phoenix and later Arizona Coyotes after the team relocated from Canada to the American southwest.

Doan became the team's captain during the 2003-04 season and promptly recorded career-highs in goals, assists, and points (27, 41, 68). Doan signed a five-year, $22.75 million contract to remain with the Coyotes in early 2007. After the deal expired, Doan re-signed in the desert to a four-year, $21.2 million contract despite uncertainty about the team's future in Arizona which has since been resolved. Often nicknamed Captain Coyote, Doan is beloved by the team's fans for his loyalty and tenacity on the ice. He is a two-time NHL All-Star in 2004 and 2009, won the King Clancy Memorial Trophy in 2010, and the Mark Messier Leadership Award in 2012. Doan has four children with his wife, Andrea, and lives in the Phoenix area. He is a practicing Christian. In 2011, he and his brother were featured on the hit series "Mantracker". 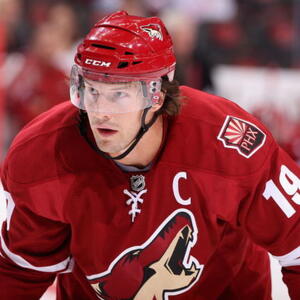