Sergei Gonchar Net Worth: Sergei Gonchar is a Russian professional hockey player who has a net worth of $44 million. Sergei Gonchar was born in Chelyabinsk, Russian SFSR, Soviet Union in April 1974. Gonchar played for Traktor Chelyabinsk in the CIS, HC Dynamo Moscow in the IHL, and the Portland Pirates in the AHL.

He was drafted #14 by the Washington Capitals in the 1992 NHL Draft. He signed a five year deal worth $25 million with the Pittsburgh Pirates in 2005. In 2010 he signed a three year deal worth $16 million with the Ottawa Senators. He was traded to the Dallas Stars in 2013 and signed a two year deal worth $10 million. Sergei won the Stanley Cup championships in 2009 with the Pittsburgh Penguins. Gonchar played in the NHL All-Star Game in 2001, 2002, 2003, 2004, and 2008. He was named to the NHL Second All-Star Team in 2001 and 2003. Gonchar represents Russia in international competition. He won Silver medals at the 1998 Winter Olympics and the 2010 World Championships, and Bronze medals at the 2002 Winter Olympics and 2007 World Championships. Gonchar was traded to the Montreal Canadiens in November 2014. 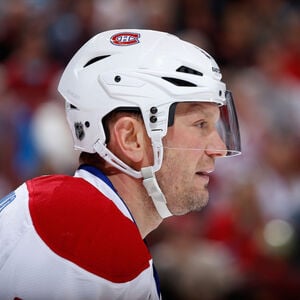