Sergei Fedorov Net Worth and salary: Sergei Fedorov is a Russian professional ice hockey center who has a net worth of $10 million. One of the first players to defect from the Soviet Union to play in the NHL, he served 13 seasons with the Detroit Red Wings, and later played with the Mighty Ducks, Columbus Blue Jackets, and Washington Capitals. Considered one of the greatest players of all time, Fedorov won three Stanley Cups, two Olympic medals, and the Hart Memorial Trophy.

Sergei's net worth should be much much higher considering he earned $80 million in salary alone during his career. Unfortunately Sergei reportedly was swindled of $40 million by a former business partner of over a decade. In the wake of the financial upheaval, he was forced to sell off many assets and play for two years in the Kontinental Hockey League in Russia, at a time when he was planning to be retired. He successfully sued the former partner but has so far reportedly been unable to collect on the judgment. He is currently the general manager of HC CSKA Moscow of the Kontinental Hockey League (KHL).

Early Life and Defection to the NHL: Sergei Fedorov was born as Sergei Fyodorov in 1969 in Pskov, Soviet Union, to parents Natalia and Viktor. By the age of 16, he was already playing hockey for the CSKA Moscow club. In 1989, he was drafted by the Detroit Red Wings; the following year, he made the decision to defect to the US. After participating in the 1990 Goodwill Games in Portland, Oregon, Fedorov left with Red Wings vice president Jim Lites in the private jet of Red Wings owner Mike Ilitch.

Career with the Red Wings: Fedorov was an immediate success with the Red Wings. During the 1993-1994 season, he earned the prestigious Hart Memorial Trophy for being the team's most valuable player. He also received the Frank J. Selke Trophy, for being the top defensive forward, and the Lester B. Pearson Award, for being the best player as selected by fellow NHL athletes. In the next season, Fedorov finished second in points with 20 goals and 30 assists across 42 games. Despite the Red Wings losing the Stanley Cup, Fedorov led the playoffs in scoring, and led the Finals in goals. Even greater success came in 1996, when Fedorov won another Selke Trophy upon scoring 39 goals and 107 points across 78 games. That season, he helped Detroit set an NHL record for wins in a single season, with 62.

For the 1996-1997 season, Fedorov was a member of the first Red Wings Stanley Cup championship team since 1955, and led the Finals in goals and points. During the season, he also achieved the uncommon feat of scoring five goals in a single game. The following years were among the biggest for Fedorov. As part of the "Russian Five" – a nickname given to five Red Wings players hailing from the Soviet Union – he and the team finally won the Stanley Cup, in both 1997 and 1998. In the latter year, Fedorov was paid $28 million by Detroit to keep him on the team, the biggest single-season amount ever given to an NHL player. Fedorov and the Red Wings won their third Stanley Cup in the 2001-2002 season. 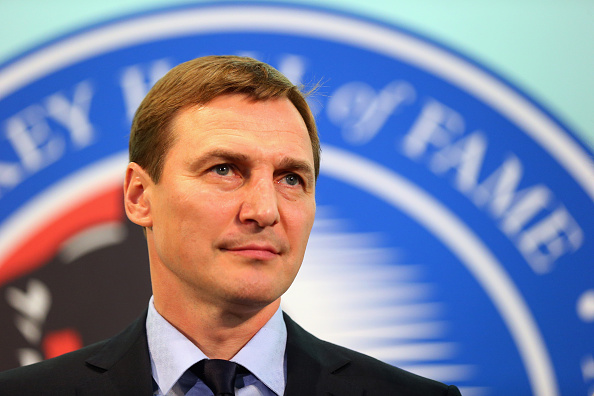 Mighty Ducks and Columbus Blue Jackets: Following Detroit's loss to the Mighty Ducks of Anaheim in the first round of the 2003 playoffs, Fedorov signed as a free agent with the latter team. He remained with the Ducks until 2005. During his tenure with the team, he made his 1,000th NHL point, making him the first Russian-born player to accomplish that feat.

In November of 2005, Fedorov was traded to the Columbus Blue Jackets, with which he played his 1,000th NHL game. However, the team's general manager Brian Burke expressed disappointment with Fedorov, finding him more interested in enjoying the Los Angeles nightlife than positively contributing to the Blue Jackets.

Washington Capitals and Kontinental Hockey League: In 2008, Fedorov was traded to the Washington Capitals; with the team, he signed a $4 million one-year contract. During the season, his final in the NHL, Fedorov earned the distinction of scoring the most goals of any Russian-born hockey player, passing Alexander Mogilny.

Fedorov returned to Russia for the 2009-2010 season, and signed a two-year deal with Metallurg Magnitogorsk. While on the team, he scored his 1,500th point in an official game. Later, in 2013, Fedorov announced his return to playing for CSKA Moscow. He played the last two games of his career for the club at the 2013 Spengler Cup.

At the 1998 Winter Olympics in Nagano, Fedorov helped carry the Russian team to a silver medal, and at the 2002 games in Salt Lake City, ended the tournament with a bronze medal. Fedorov later played at the 2010 games in Vancouver, where Russia was eliminated in the quarterfinals.

Personal Life and Post-Playing Career: Fedorov claims he married tennis star Anna Kournikova in 2001, but the marriage has been denied by Kournikova's representatives. In 2004, Fedorov was romantically involved with actress Tara Reid.

In 1999, Fedorov used his entire base season salary of $2 million to establish the Sergei Fedorov Foundation, a charity that helps children in the Detroit area. It has donated more than $800,000 to other charities that benefit children in need. Fedorov is also the general manager of CSKA Moscow; he lives in the city during hockey season, and splits his summers between Miami and Detroit. 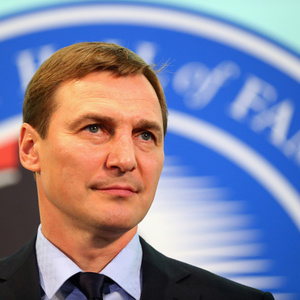