Scott Stevens net worth: Scott Stevens is a Canadian former professional hockey player who has a net worth of $25 million. Scott Stevens was born in Kitchener, Ontario, Canada in April 1964. He was a defenseman who shot left handed. Stevens started his career with the Kitchener Rangers in the OHL.

He was drafted #5 by the Washington Capitals in the 1982 National Hockey League Draft. Stevens played for Washington from 1982 to 1990. He played for the St. Louis Blues from 1990 to 1991 and finished his NHL career with the New Jersey Devils from 1991 to 2004. Stevens also represented Canada in international competition and won a Gold Medal at the 1991 Canada Cup. He won Silver Medals at the 1985 and 1989 World Championships and at the 1996 World Cup of Hockey. He captained the New Jersey Devils to four Stanley Cup Finals appearances and won the Conn Smythe Trophy as the MVP of the Stanley Cup playoffs in 2000. Stevens' career was ended after he took a slap shot to the head which caused post-concussion syndrome. He was inducted into the Hockey Hall of Fame in his first year of eligibility in 2007. He won three Stanley Cups and was selected to the All-Star game 13 times. 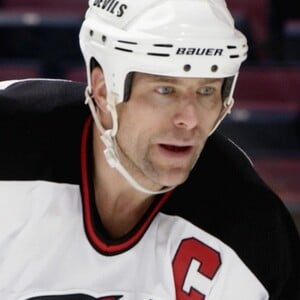