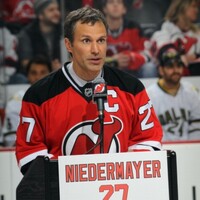 Scott Niedermayer net worth: Scott Niedermayer is a retired Canadian NHL player who has a net worth of $30 million. Scott Niedermayer acquired his net worth as an ice hockey defenseman for New Jersey Devils and Anaheim Ducks before retiring from the game in 2010. Niedermayer's professional career began then he was drafted by New Jersey Devils in the 1991 NHL Entry Draft and after his performance, he was considered one of the most talented defenseman. He proved his worth as Niedermayer was named the All-Rookie Team for his performance during 1992-93 season. During his time with the Devils, Niedermayer helped the team win three Stanley Cups and in addition to this he won the Norris Trophy as the league's top defenseman. In 2005, Niedermayer signed with the Anaheim Ducks, inking a deal worth $27 million. In his first season, Niedermayer led the team to the Western Conference Finals. During the 2006-07 season, he helped the team to win their first ever Stanley Cup as well as earning the Conn Smythe Trophy. After much deliberation, Niedermayer announced his retirement from the game in 2010. Since then, he was the captain of Team Canada for the 2010 Winter Olympics and led Canada to gold in a victory over Team USA.