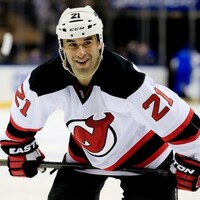 Scott Gomez Net Worth: Scott Gomez is an American professional hockey player who has a net worth of $50 million. Scott Gomez was born in Anchorage, Alaska in December 1979. He played for the South Surrey Eagles in the BCHL and the Tri-City Americans in the WHL. Gomez was drafted #27 by the New Jersey Devils in the 1998 NHL Draft. He played with the Devils until 2007 when he signed with the New York Rangers for a seven year $51.5 million deal. Gomez was traded to the Montreal Canadiens in 2009. During the NHL strike seasons he played for the Alaska Aces of the ECHL. He signed with the San Jose Sharks in 2013 for a one year contract worth $700,000. Later that year he signed a one year deal with the Florida Panthers. In his first NHL season Scott was a member of the All-Rookie Team, won the Calder Memorial Trophy, and played in the NHL All-Star Game. He won the Stanley Cup with the Devils in 2000 and 2003. Gomez led the NHL in assists in the 2003-04 season and played in the NHL All-Star Game again in 2007-08. In 2008 he won the Victoria Cup with the New York Rangers. Gomez is an unrestricted free agent heading into the 2014-15 season. He has also represented the United States in international competition.