Ryan Smyth net worth: Ryan Smyth is a Canadian retired professional hockey player who has a net worth of $20 million dollars. Ryan Smyth was born in Banff, Alberta, Canada, and first made a name for himself playing for the Moose Jaw Warriors in the Western Hockey League. By his third season with the team, he'd become a top NHL prospect, and was picked up by the Edmonton Oilers.

He debuted in one game in 1995, and then spent time going back and forth between the Cape Breton Oilers of the American Hockey League and the Moose Jaw Warriors. By 1996, he'd moved to full-time play with the Edmonton Oilers. He spent the next 12 seasons with the Oilers. He then spent one season with the New York Islanders, two seasons with the Colorado Avalanche, and two seasons with the Los Angeles Kings, before returning to the Edmonton Oilers. He retired from professional play on April 11, 2014. As part of the Canadian National Team, he won gold medals at the 1995 World Junior Championship, the 2002 Olympics, the 2003 and 2004 World Championships, and the 2004 World Cup. 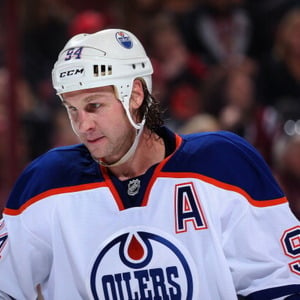