Ryan Miller Net Worth: Ryan Miller is an American hockey league goaltender who has a net worth of $18 million. As of this writing he is the winning-est American-born goalie in NHL history.

Ryan Miller was born July 17, 1980 in East Lansing, Michigan. He is the older brother of current Detroit Red Wings winger Drew Miller. Ryan Miller was drafted 138th overall by the Buffalo Sabres in the 1999 NHL Entry Draft. In 2010, he won the Vezina Trophy as the league's best goaltender. He was selected to play for the U.S. Hockey team in the 2010 Winter Olympic Games in Vancouver, B.C., Canada, as starting goaltender. Miller won a silver medal with the team and was named MVP of the tournament. Four years later he was selected for the 2014 Winter Olympics and served as the back-up to Jonathan Quick.

Contracts: In 2010 he signed a five-year extension with the Sabres worth $31.25 million. On February 28, 2014, Ryan Miller and Steve Ott were traded to the St. Louis Blues in exchange for Jaroslav Halak, Chris Stewart, William Carrier and 2 future draft picks. Miller then became an unrestricted free agent before signing a three-year, $18 million contract with the Vancouver Canucks. In 2017 he signed a two-year, $4 million deal with the Anaheim Ducks which was extended in 2019 with a one-year $2.235 million deal.

Ryan Miller is known for his hybrid style of goaltending. During his stint in youth hockey, Miller originally played as a forward. As a college goalie for the Michigan State University Spartans, Miller set an NCAA record with 26 career shutouts and was the winner of the Hobey Baker Award in 2001. After three seasons with Michigan State, Miller moved to the American Hockey League, where he played for the Sabres' affiliate the Rochester Americans from the 2002–03 season until the 2004–05 season, after which Miller became a restricted free agent and waived his right to arbitration.

In 2006, the Sabres announced they had re-signed Miller to a three-year contract. Miller had the shutout stopping 20 shots in a game following the death of his 18-year-old cousin, Matt, who had died the Monday before of a complication with a bone-marrow transplant. Miller's current helmet design has the words "Matt Man" on the back in remembrance of his cousin.  Ryan Miller, along with his father Dean, founded the Steadfast Foundation, which supports cancer patients and their families.

Ryan has been married to actress Noureen DeWulf since 2011. 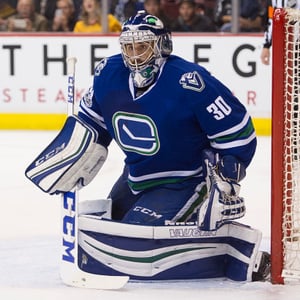