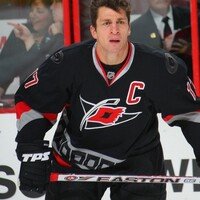 Rod Brind'Amour Net Worth: Rod Brind'Amour is a former Canadian professional ice hockey player who has a net worth of $35 million. Born in 1970 in Ottawa, Ontario, Canada, Rod Brind'Amour's professional career got off to its start when the St. Louis Blues took him ninth overall during the 1988 NHL Entry Draft. Brind'Amour immediately went to play college hockey at Michigan State University before he joined the Blues in 1989 during the team's postseason run. His very first NHL shot ended up being a goal in the playoffs. The next year, Brind'Amour was traded to the Philadelphia Flyers, where he became a fan favorite and alternate captain. About ten years later, he was traded to the Carolina Hurricanes, where he won the only Stanley Cup championship of his career during the 2005-06 season against the Edmonton Oilers in seven games. He landed a five-year deal with the Hurricanes following the Cup win. In 2010, Eric Staal replaced Brind'Amour as captain; he retired after the season after playing nearly 1,500 career games. He started working in the Hurricanes' front office as a director. His jersey was retired in early 2011; a few months later, he took a position as an assistant coach with the team. Brind'Amour played in one NHL All-Star game in 1992 and won the Frank J. Selke Trophy in 2005 and again in 2006. He played internationally for Canada, earning a gold medal at the 1994 World Championships in Italy. He has three children from his first marriage, and one son from his second union to Amy Biedenbach in 2010.