Roberto Luongo is a Canadian professional ice hockey player who has a net worth of $46 million. Roberto Luongo has earned his net worth as a professional goaltender for the Vancouver Canucks of the National Hockey League (NHL). Luongo was born on April 4, 1979 in Montreal, Quebec; he is of Italian and Irish ancestry.

His father was an Italian immigrant, born in Santa Paulina, Avellino, who worked in the construction and delivery of furniture, and his mother, an Irish-Canadian worked in marketing with Air Canada. His parents Antonio and Pasqualina married in Montreal after Antonio emigrated there in 1976. Luongo is well-known for the butterfly style of goaltending, and has previously played in the NHL for both the New York Islanders and the Florida Panthers. Luongo was a finalist for the Vezina Trophy as the league's best goaltender in 2004, 2007, and in 2011. And the Lester B. Pearson Award as the top player voted by his peers in both 2004 and again in 2007. He was also a finalist for the Hart Memorial Trophy as the league's most valuable player in 2007. He played junior hockey in the Quebec Major Junior Hockey League (QMJHL) for the Val-d'Or Foreurs and the Acadie-Bathurst Titan, winning back-to-back Presient's Cups and establishing the league's all-time playoff records in games played and wins. Luongo was the highest drafted goaltender in QMJHL. Luongo's international debut was at the 1995 World U-17 Hockey Challenge held in Moncton, New Brunswick, while performing with Team Quebec, who won the bronze.Luongo, was the highest drafted goaltender in QMJHL history at the second overall in 1995. His junior career began in 1995-96 with Val-d'Or and he posted six wins in only in 23 games. Luongo was selected in the first round of the 1997 NFL Entry Draft, by the New York Islanders. In addition to being an avid golfer, Luongo also enjoys playing poker. 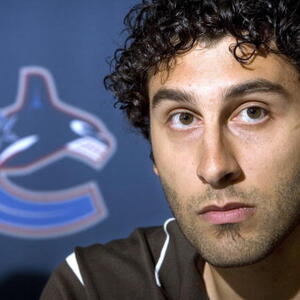