Robert Thomas net worth: Robert Thomas is a Canadian professional hockey player who has a net worth of $2 million. He is best known for winning a Stanley Cup with the St. Louis Blues.

Robert Thomas was born in Aurora, Ontario, Canada in July 1999. He is a center who shoots right handed. Thomas played for the York Simcoe Express in the ETAMMHL in 2014-15. He played for the London Knights of the Ontario Hockey League from 2015 to 2018 and also played for the Hamilton Bulldogs during the 2017-18 season. Robert Thomas was drafted 20th overall by the St. Louis Blues in the 2017 National Hockey League Draft. He won a Stanley Cup with the Blues in 2019. Thomas has represented Canada in international competition, winning gold medals at the 2018 World Junior Championships and the 2015 U-17 Hockey Challenge. He won the J. Ross Robertson Cup with the London Knights and Hamilton Bulldogs and the Memorial Cup with the Knights as well as winning the Wayne Gretzky 99 Award in 2018. 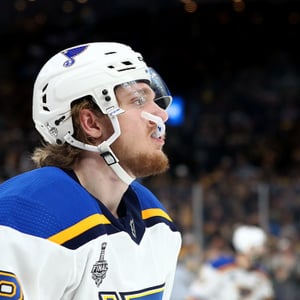