Rick Nash net worth: Rick Nash is a Canadian professional hockey player who has a net worth of $20 million. Rick Nash was born in Brampton, Ontario, Canada in June 1984. He is a left winger who first played for the Toronto Marlboros of the GTHL and then London Knights of the Ontario Hockey League.

Nash was drafted #1 overall by the Columbus Blue Jackets in the 2002 National Hockey League Draft. He played for the Blue Jackets from 2002 to 2012 and has played for the New York Rangers since 2012. Nash also represents Canada in international competition and won Gold Medals at the Olympic Winter Games in 2010 and 2014. He won Gold at the 2007 World Championships and Silvers at the 2005 and 2008 World Championships and at the 2002 World Junior Championships. Nash was part of the NHL All-Rookie Team in 2003 and won the Maurice "Rocket" Richard Trophy in 2004. He won the NHL Foundation Player Award in 2009 and is a six time NHL All-Star. In 2009 he signed an eight year deal with Columbus for $62.4 million. 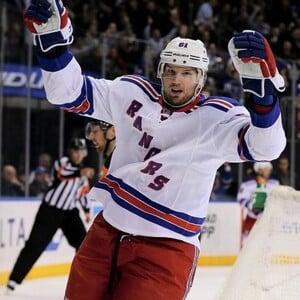