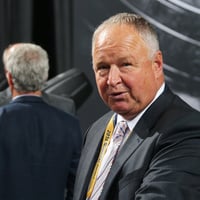 Randy Carlyle net worth and salary: Randy Carlyle is a Canadian former professional hockey player and hockey coach who has a net worth of $12 million. Randy Carlyle was born in Sudbury, Ontario, Canada in April of 1956. At the beginning of his career in sports, Carlyle played junior hockey for the Sudbury Wolves from 1973 to 1976. Then, In 1976 he was selected to the Ontario Major Junior Hockey League Second All-Star Team. In 1976 he was drafted #30 by the Toronto Maple Leafs in the NHL Draft and #69 by the Cincinnati Stingers in the WHA Draft. He played for the Maple Leafs from 1976 to 1978 before being traded to the Pittsburgh Penguins where he played for another six years, from 1978 to 1984. After that he was then traded to the Winnipeg Jets where he finished his playing career from 1984 to 1993. In 1991 Carlyle won the Norris Trophy for top defensive player and was named to the NHL First All-Star Team. It was during this period that he also won a Silver medal representing Canada at the 1989 Sweden World Championship. Choosing to end his career on a high note, after retiring he entered into the next phase of his career in professional hockey and became an assistant coach for the Jets during the 1995-96 season. He also worked as an assistant for the IHL's Manitoba Moose from 1996 to 2002 and then for the Washington Capitals of the NHL from 2002 to 2004. After that, from 2004 to 2005 Carlyle was head coach of the Manitoba Moose. He served as head coach of the NHL's Anaheim Mighty Ducks/Ducks from 2005 to 2011 and of the Toronto Maple Leafs from 2012 until he was unfortunately fired in January 2015. In better days for the hockey coach, Carlyle won the Stanley Cup coaching the Ducks in the 2006-07 season. In addition to his other accolandes, Carlyle is an Honoured Member of the Manitoba Hockey Hall of Fame.