Louis Blues, where he appeared in three NHL All-Star games in 1999, 2000, and 2000, and won the 2000 Lady Byng Memorial Trophy. Demitra was fifth on the Blues' all-time scoring list with 2014 goals and 493 points in close to 500 games. He played overseas during the NHL lockout before landing a free agent deal with the Los Angeles Kings. Soon after, Demitra was traded to the Minnesota Wild before scoring a contract with the Vancouver Canucks. He played in Vancouver for two seasons before he decided to play in the Kontinental Hockey League with Lokomotiv. Demitra played with the Czechoslovakian men's national team, earning several medals, before he joined the Slovakian team. He appeared in three different Olympics. Demitra died on September 7, 2011, when the airplane transporting the Lokomotiv team and coaches to their season opener crashed after takeoff on the Volga River bank outside of Yaroslavl, Russia. All 44 people onboard died. He left behind his wife, Maja, and two children. Maja was pregnant with the couple's third child at the time of her husband's death. 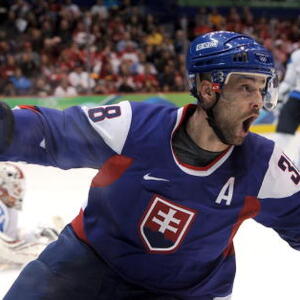