Patrik Elias Net Worth: Patrik Elias is a Czech professional hockey player who has a net worth of $50 million. Patrik Elias was born in Trebic, Czechoslovakia in April 1976. He played for HC Kladno in the TCH and CZE and for the Albany River Rats in the AHL. Elias was drafted #51 by the New Jersey Devils in the 1994 NHL Draft. He has played with the Devils his entire NHL career but has also played for HC Pardubice, Horacka Slavia Trebic, HC JME Znojemsti Orli, and Metallurg Magnitogorsk. Elias signed a seven year deal worth $42 million with New Jersey in 2006. He was part of the NHL All-Rookie team and has won Stanley Cups with the Devils in 1999-00 and 2002-03. Elias played in the NHL All-Star Game in 2000, 2002, and 2011. He was named to the NHL First All-Star team for the 2000-01 season. In 2009 and 2012 he was awarded a Golden Hockey Stick. Elias has represented the Czech Republic in international competition winning Bronze medals at the 2006 Winter Olympics, 1998 World Championships, and 2011 World Championships. He holds many for the New Jersey Devils including most points in one season, most points in a playoff season, career assists, hat tricks, career points, game winning goals, and career goals. 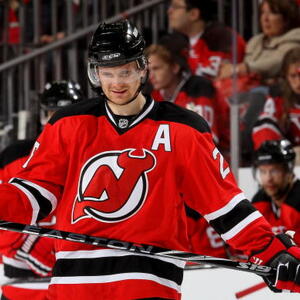