Patrick Kane net worth: Patrick Kane is an American professional ice hockey player who has a net worth of $28 million. Patrick Kane was born in Buffalo, New York in November 1988. He is a right winger who shoots left handed. Kane played junior hockey for the USA Bobcats starting at 14 years of age and would become the MVP.

He spent three years playing for the Honeybaked AAA team in the Midwest Elite Hockey League. Kane was drafted in the 5th round of the Ontario Hockey League Draft by the London Knights in 2004 but he chose not to play for them until the 2006-07 season. He played on the United States U-18 National Team Development Program. He was named as the OHL rookie of the year in 2007 and was drafted as the #1 overall pick that year by the Chicago Blackhawks where he has played ever since. In 2010 he won the Stanley Cup with Chicago when he scored the winning goal in Game 6 of the Stanley Cup Finals. Kane won another Stanley Cup in 2013 and also won the Conn Smythe Trophy for being the MVP of the Stanley Cup playoffs. In 2015 he won his third Stanley Cup championship with the Blackhawks. Kane has been an NHL All-Star in 2009, 2011, 2012, and 2015. In 2009 he signed a five year deal for $31.5 million and in 2014 he signed an eight year contract extension with an annual average salary of $10.5 million. Kane has also competed internationally for the United States and won a Silver medal at the 2010 Olympic Games. He won Hart Memorial Trophy for being league MVP for the 2015-16 season. 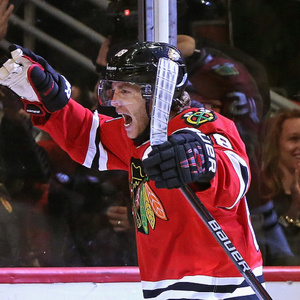