P.K. Subban net worth and salary: P.K. Subban is a Canadian professional hockey player who has a net worth of $35 million. P.K. Subban was born in Toronto, Ontario, Canada in May 1989. He is a defenseman who started his career with the Belleville Bulls in the Ontario Hockey League from 2005 to 2009. Subban was drafted #47 by the Montreal Canadiens in the 2007 National Hockey League Draft. He played for the Hamilton Bulldogs in the American Hockey League from 2009 to 2010 and has played the Canadiens since 2009. Subban has also represented Canada in international competition and won Gold Medals at the 2014 Sochi Winter Olympics and the 2008 and 2009 World Junior Championships. He was an OHL First All-Star Team member and won the President's Award in the AHL. In the NHL Subban was a member of the 2011 All-Rookie Team. He won the James Norris Memorial Trophy in 2013 and was selected to the NHL First All-Star Team in 2013 and 2015. In 2014 Subban signed an eight year deal worth $72 million with the Canadiens.

In August 2019 it was announced that P.K. Subban and Olympian Lindsey Vonn were engaged. Lindsey actually proposed to him! 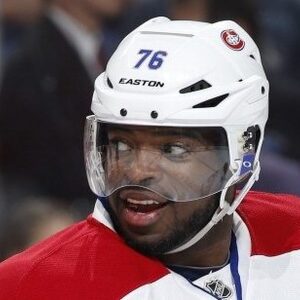