Olli Jokinen Net Worth: Olli Jokinen is a Finnish professional ice hockey player who has a net worth of $30 million. Born in Kuopio, Finland, in 1978, Olli Jokinen played professionally in his home country and with SM-liiga and HIFK before the Los Angeles Kings drafted him third overall during the 1997 NHL Entry Draft.

He was traded to the New York Islanders in 1999, where he played every regular season game before he was dealt to the Florida Panthers a year later. Jokinen's tenure in the Sunshine State got off to a rocky start as he battled with the team's head coach, but Jokinen eventually had his breakout season in 2002-03, where he led the team in goals and points. During the 2008 NHL Entry Draft, he was moved to the Phoenix Coyotes, and, a year after that, he was traded to the Calgary Flames. Jokinen has since played for the New York Rangers, the Winnipeg Jets, and the Nashville Predators. As of the fall of 2014, Jokinen is with the Preds on a one-year, $2.5 million deal. He has played internationally for Finland since the mid-90s, winning several Olympic medals, including silver at the 2006 games in Turin and bronze at the 2010 games in Vancouver and the 2014 games in Sochi. Jokinen has been married to his wife, Katerina, since 2001. They have three children together. 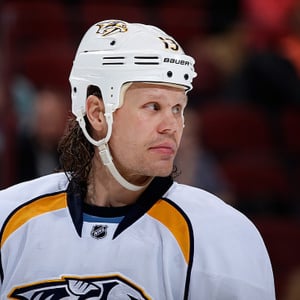