Olaf Kolzig Net Worth: Olaf Kolzig is a former South African-born German professional ice hockey player who has a net worth of $30 million. Born in Johannesburg, South Africa, in 1970, Olaf Kolzig, better known as Olie, was drafted in the 1989 NHL Entry Draft by the Washington Capitals. He made his NHL rookie debut during the 1989-90 season, but was sent down to the minors until the mid-'90s.

He was part of the Caps' 1997-98 Stanley Cup Finals team. He earned the league's award for Best Goalie with the Vezina Trophy during the 2000 season, finishing with a 41-20-11 record, a 2.24 goals against average, and five shutouts. Kolzig played nearly all of his 14-year NHL career with the Capitals outside of an eight-game stint with the Tampa Bay Lightning and a trade to the Toronto Maple Leafs (though he did not play a game with the team) before his retirement. Known as Godzilla or Olie the Goalie, he's a decorated netminder who appeared in the NHL All-Star games in 1998 and 2000. He won the 2006 King Clancy Memorial Trophy and the 1994 Jack A. Butterfield Trophy. In 2010, he was inducted into the ECHL Hall of Fame. He holds several Washington records among fellow goaltenders, including most career wins, most career minutes played, most career shutouts, most career points scored, and high save percentage in a season. 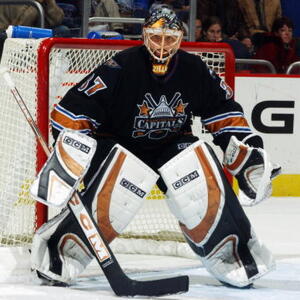