He also played for the IHL's Russian Penguins and the AHL's Springfield Falcons. Khabibulin was drafted #204 by the Winnipeg Jets in the 1992 NHL Draft. He played with the Winnipeg Jets and the team moved and was renamed the Phoenix Coyotes. He was traded to the Tampa Bay Lightning in 2000 and then signed a four year deal worth $27 million with the Chicago Blackhawks in 2005. In 2009 he signed a four year deal worth $15 million with the Edmonton Oilers. In 2013 he returned to Chicago and signed a one year deal worth $2 million. Khabibulin won a Stanley Cup championship with the Tampa Bay Lightning in 2004. He played in the NHL All-Star Game in 1998, 1999, 2002, and 2003. As a goaltender he has been nicknamed The Bulin Wall. He has won a Gold and Bronze medal at the Olympics and was the Best Goaltender at the 2002 Winter Olympics for Russia. 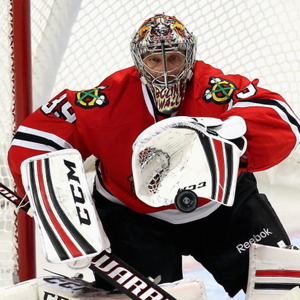