Niklas Hjalmarsson Net Worth: Niklas Hjalmarsson is a Swedish professional hockey player who has a net worth of $12 million. Niklas Hjalmarsson was born in Eksjo, Sweden in June 1987. He is a defenseman who first played for HV71 in the Swedish Hockey League. Hjalmarsson was drafted #108 by the Chicago Blackhawks in the 2005 National Hockey League Draft. He has played for the Blackhawks his entire NHL career and has also played for the Rockford IceHogs of the AHL and Bolzano HC of Serie A. Hjalmarsson has also represented Sweden in international competition and won a Silver Medal at the 2014 Sochi Olympic Games and a Bronze Medal at the 2005 IIHF World Under-18 Championships. He signed a four year deal with the Chicago Blackhawks for $14 million in 2010. In 2013 he signed a five year extension worth an annual average of $4.1 million. Hjalmarsson won the Stanley Cup with Chicago in 2010, 2013, and 2015. 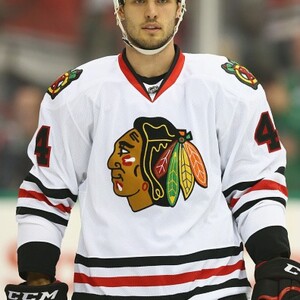