Nicklas Lidstrom net worth: Nicklas Lidstrom is a retired professional ice hockey player who has a net worth of $60 million. Nicklas Lidstrom was born in Krylbo, Sweden in 1970. In 1989 he was drafted by the Detroit Red Wings and began his twenty season run with the NHL in the 1991-92 season.

Lidstrom has played in all the playoffs with the Detroit Red Wings for his twenty seasons with the exception of the 1994-95 dispute between the NHLPA and the NHL, which caused a lockout for that season. During this time Lidstrom played for Vasteris IK and returned to the Detroit Red Wings following an agreement between the owners and the players. During his career Lidstrom has won many awards and trophies, among these are: World Championship Gold Medal Winner for Sweden, seven-time winner of the Norris Trophy, twelve time NHL All STAR, 2002 Conne Smythe Trophy and many more. Nicklas Lidstrom is considered a legend in the history of Ice Hockey and the best defenseman of his time. In 2006, he was named Captain of the Detroit Red Wings and led them into victory, winning the 2008 Stanley Cup Playoffs against the Pittsburgh Penguins. He was the first European Captain to win the Stanley Cup. He was captain of the Red Wings for his last six seasons. Although he considered retirement in 2010, he ended up signing for another season with the Red Wings. But in 2012 his decision to retire became official and beginning in July of 2012 has become a scout for the Detroit Red Wings. He and his lovely wife have four children, Kevin, Adam, Samuel and Lucas. Kevin attended his senior year at a hockey school in Sweden. Nicklas Lidstrom was nicknamed Mr. Perfect or The Perfect Human and has the utmost respect of everyone that had the privilege of playing on his team.

In 2015 Nicklas was inducted into the NHL Hall of Fame. 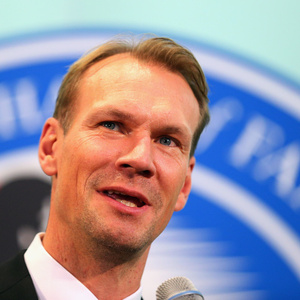