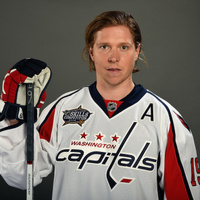 Nicklas Backstrom Net Worth and salary: Nicklas Backstrom is a Swedish professional ice hockey player who has a net worth of $40 million dollars. Born in Gavle, Sweden, in 1987, Nicklas Backstrom plays center for the NHL's Washington Capitals. His juniors career began overseas when he was 15 years old and he soon was named Swedish Junior Hockey Player of the Year. In 2006, the Washington Capitals chose him fourth overall in the draft, though he remained in Sweden for an extra year before joining the NHL. Backstrom signed his three-year entry-level deal with the Capitals in 2007 and scored his first NHL point in October of 2007 against the Thrashers. He went on to set franchise and league records while playing on a line with Alexander Ovechkin, forming one of the most feared duos in the NHL. Backstrom tallied 69 points with 14 goals as a rookie and came in second for the Calder Trophy. Three years later, he signed a ten-year extension with the Capitals. Since beginning his career, he has scored more than 500 points for the Caps through the 2013-14 season. Backstrom is an integral part of the Swedish national team, leading them to a gold finish at the 2006 World Championships and a silver medal at the 2014 Winter Olympics in Sochi.