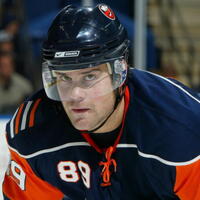 Mike Comrie Net Worth: Mike Comrie is a retired Canadian professional hockey player who has a net worth of $20 million. He was born Michael William Comrie on September 11, 1980, in Edmonton, Alberta, Canada. Comrie comes from a very wealthy family. His father Bill Comrie has a net worth of $500 million. The father's fortune was made thanks to a Canadian furniture and appliance empire called The Brick which was eventually sold for $700 million. A student at the Jasper Place High School then University of Michigan, Mike Comrie was selected by the Edmonton Oilers out of the University of Michigan as its third round pick for the 1999 NHL Entry Draft. After this deal fell through, he continued to play for other teams of the National Hockey League, including Philadelphia Flyers, Phoenix Coyotes, Ottawa Senators, New York Islanders and Pittsburgh Penguins. With the Flyers he played only 21 games and then he got traded to Phoenix Coyotes in exchange for Branko Radivojevic, Ben Eager and Sean Burke. He played center throughout his 13-year-long NHL career. 2007 saw him playing for two other teams, first for the Ottawa Senators and subsequently for the New York Islanders. In September 2009, he got back to Edmonton Oilers by inking a one-year $1.125 million worth of contract. In 2011, he would sign another year-long contract worth $500,000, but this time with the Pittsburgh Penguins. Unfortunately, he would be soon forced to retire from the sport after undergoing his third hip surgery. Mike Comrie officially retired in February 2012. Off the hockey rink, he is the former husband of actress Hilary Duff and the father of their child. Duff filed for divorce in 2015.