Miikka Kiprusoff Net Worth: Miikka Kiprusoff is a Finnish retired professional hockey player who has a net worth of $40 million. Miikka Kiprusoff was born in Turku, Finland in October 1976. Kiprusoff started off playing for TPS in the SM-I league and then played for AIK IF and AIK in Elit.

He played for the Kentucky Thoroughblades in the AHL. Kiprusoff was drafted #116 by the San Jose Sharks in the 1995 NHL Draft. After playing in San Jose he was traded to the Calgary Flames in 2003. Miikka signed a one year deal worth $2.95 million. In 2007 he signed a six year extension worth $35 million. In the SM-liiga Kiprusoff won the Urpo Ylonen trophy and the Jari Kurri trophy. In the NHL he was a First Team All-Star and won the Vezina Trophy and Williams M. Jennings Trophy in 2005-2006. He also won the Molson Cup from the Calgary Flames in three seasons. He announced his retirement in September 2013 and finished as the Flames' all-time leader in wins, shutouts, and games played by a goaltender. Kiprusoff also represented Finland in international competition. He won Silver medals at the 1999 and 2001 World Championships and the 2004 World Cup of Hockey. He also won a Bronze medal at the 2010 Winter Olympics. 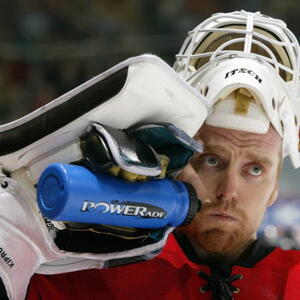