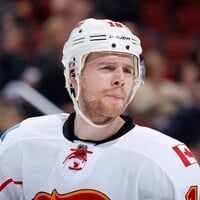 Matt Stajan net worth: Matt Stajan is a Canadian professional ice hockey player who has a net worth of $6 million. Matt Stajan was born in Mississauga, Ontario, Canada in December 1983. He is a center who first played for the Belleville Bulls of the OHL. Stajan was drafted #57 by the Toronto Maple Leafs in the 2002 National Hockey League Draft. He played for the Maple Leafs from 2002 to 2010 and has played for the Calgary Flames ever since. Stajan played in the NHL YoungStars Game and has received the Ralph T. Scurfield Humanitarian Award and the J.R. "Bud" McCaig Award. He has also represented Canada in international competition and won a Silver Medal at the 2003 World Junior Championship. In 2010 he signed a four year deal with the Flames for $14 million. Stajan is active in the National Hockey League Players' Association and has represented both of his teams.