Mats Sundin net worth: Mats Sundin is a Swedish former professional hockey player who has a net worth of $40 million. Mats Sundin was born in Bromma, Sweden in February 1971. He was a center who played in Sweden before being drafted #1 by the Quebec Nordiques in the 1989 National Hockey League Draft.

Sundin played for Quebec until 1994 and then played for the Toronto Maple Leafs from 1994 to 2008. He finished his NHL career with the Vancouver Canucks from 2008 to 2009. Sundin played in the NHL All-Star Game nine times and was named to the NHL Second All-Star Team twice. He was awarded the Mark Messier Leadership Award in 2008 and was elected to the Hockey Hall of Fame in 2012. Sundin also represented Sweden in international competition and won Gold Medals at the 2006 Winter Olympics and 1991, 1992, and 1998 World Championships. He holds the record for being the career leader in games played for Canadian teams. 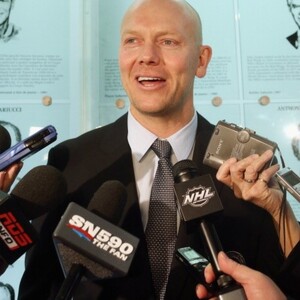