A two-time Hobey Baker Award finalist, St. Louis began playing with the International Hockey League's Cleveland Lumberjacks before earning a contract offer from the Calgary Flames. St. Louis played with the team's minor league affiliate before making his NHL debut on October 9, 1998. The scored his first career NHL goal a few weeks later. In 2000, he signed a free agent deal with the Tampa Bay Lightning, eventually becoming one of the team's top players and earning captain status. St. Louis was later traded to the New York Rangers in 2014. He has played in more than 1,000 NHL career games and was with the Lightning for their 2004 Stanley Cup championship. He has won dozens of awards throughout his career, including All-Star recognition, the Hart Memorial Trophy, and the Lester B. Pearson Award. He has played for Canada's national team, winning a gold medal at the 2014 Olympics in Sochi. 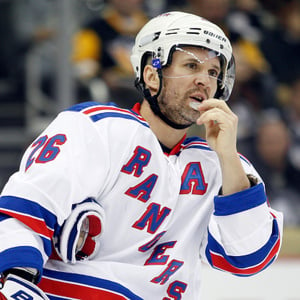