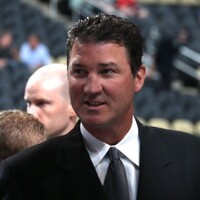 What is Mario Lemieux's Net Worth and Salary?

Mario Lemieux is a former Canadian professional ice hockey player who has a net worth of $200 million. Also known as "Le Magnifique" (the magnificent one) and "Super Mario," Lemieux is considered one of the greatest hockey players of all time. Over the course of his 17-season playing career, he won the Stanley Cup twice. In 1999, he assumed ownership of the team, and after he finished his playing career he won the cup a further three times.

He broke many records over the course of his playing career, which is even more astonishing when you consider how many health issues Mario had to deal with. Many experts have stated that if he hadn't been struggling with things like a herniated disc and Hodgkin's Lymphoma, he probably would have achieved even more on the ice.

Mario Lemieux was born on October 5th of 1965 in Montreal, Quebec. Raised in a working-class household alongside two elder brothers, Mario first started playing hockey at the age of 3. In the early days, he and his brothers practiced with wooden spoons and bottle caps, and Mario's father created a rink in the back yard so the boys could constantly hone their skills. Mario got started at a young age, playing in a minor league team alongside future NHL stars like Marc Bergevin and J.J. Daigneault. He was drafted into the NHL in 1984 at the age of 19.

Mario joined the Penguins amidst controversy. He and his agent had been deadlocked with the owners, unable to finalize a deal to both party's liking. Upon being drafted by the team, Mario famously refused to shake the GM's hand or pose with the team jersey for a photo. Controversy continued, as the Penguins were in serious financial trouble when Lemieux joined. The team's performance was also quite terrible when Mario joined, and they hadn't won the playoffs for two years.

Mario's debut in the NHL was almost too good to be true. He stole the puck from Ray Brouque, a Hall of Fame defender, and immediately scored with his first-ever shot in the NHL. He ended the season as the first-ever rookie to be named Most Valuable Player. He scored 100 points in his debut season, despite missing 7 games, and Mario continued to improve over the next few seasons – although the Penguins still had trouble making the playoffs.

In 1987, he played on the Canadian national team alongside greats like Wayne Gretzky, Mark Messier, and Paul Coffey during the Canada Cup. He later stated that this was a "tremendous learning experience" that allowed him to excel during the next few years. During the 1987-88 season, Mario scored 168 points and won the league scoring title for the first time.

During this period, Lemieux was the only player to ever come close to Gretzky, who was regularly scoring more than 200 points per season. After scoring 199 points during the 1988-89 season, the Penguins made the playoffs for the first time in seven years. During that year, Mario scored 8 points in a game against the New Jersey Devils, which included 5 goals in all five possible "game situations." He is the only player to accomplish this feat. 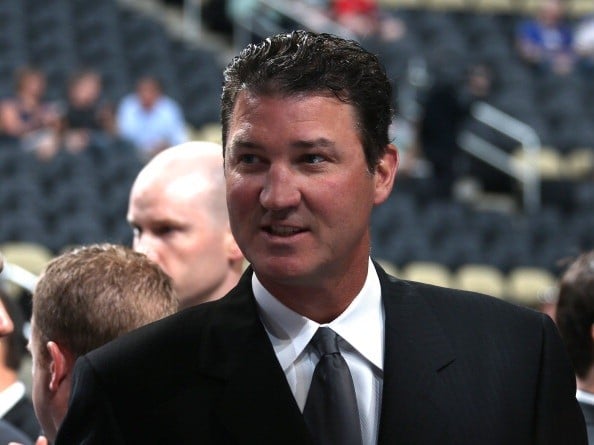 By 1990, injuries were starting to catch up with Mario Lemieux. During the 1989-90 season, he missed 21 games (and still managed to finish fourth in league points). An old back injury eventually got worse, progressing to a herniated disc. He received surgery to fix the issue, but this caused him to miss 50 games the next season. The Penguins used this time window to acquire several promising new players with an eye on the Stanley Cup. Lemieux eventually returned to the team and led the Penguins to their first-ever Stanley Cup win.

Lemieux missed more games in the 1991-92 season due to a range of injuries, but the Penguins won a second Stanley Cup despite their star player missing over 60 games. In 1993, the Penguins made a good start to the season before Mario announced that he had been diagnosed with Hodgkin's Lymphoma. Radiation treatments destroyed his ability to play. However, he returned to the NHL on the same day that he finished radiation treatment – earning a standing ovation from the Philadelphia fans after scoring a goal and an assist. His struggle with cancer somehow failed to impact his playing performance – indeed, he was playing some of the best hockey of his entire life.

In 2000, Mario Lemieux returned to the NHL as a player after signing a $500,000 endorsement deal with Nike. He played few games but managed to routinely achieve the best points-per-game average throughout the seasons until his final retirement in 2006.

The Penguins declared bankruptcy in 1999. One of their biggest creditors was Mario Lemieux. The Penguins owed Mario $32.5 million in deferred salary. In order to save the team from complete financial ruin, Lemieux offered to convert $20 million of the $32.5 million in salary he was owed into ownership equity. He was also given the opportunity to put together a new team of investors to buy the entire franchise.

Mario then partnered with billionaire investor Ron Burkle (who chipped in $20 million) and John Surma (who chipped in $2 million) to buy the entire team for $107 million. At the time, the franchise was valued at $132 million. Fast forward two decades and the team's minimum book value was $600 million. The team could be worth as much as $750 million. At that level, Mario's cut would be worth $187.5 million.

He was the first NHL player to be the majority owner of his former team. Although he initially took the role of president, CEO, and chairman, he later relinquished the first two positions.

After Leaving the NHL

After his retirement in 2006, Mario Lemieux quickly sought to sell the Pittsburgh Penguins with his ownership group. However, the deal fell through, and he was forced to hold onto the team. He then oversaw the construction of the Consol Energy Center, and a deal that kept the Penguins in Pittsburgh for at least 30 years.

Lemieux then led the team to another Stanley Cup win in 2009 – his first as an owner. He continued to explore the possibility of selling the team over the next few weeks, although the Penguins excelled under Lemieux's ownership. They then won back to back Stanley Cup championships in 2016 and 2017. To this day, Mario is the only player to have his name on the Stanley Cup as both a player and an owner.

In 1993, Mario married Nathalie Asselin. They subsequently had four children together and currently live in Sewickley, an affluent suburb of Pittsburgh.

In 2018, it was reported that Mario Lemieux was still trying to sell a mansion in Quebec worth $22 million. In reality, this property goes far beyond the confines of the word "mansion," and "castle" would be a better way to describe it. The property features 17,000 square feet of living space, 50 rooms, and 17 fireplaces. It also sits on 5.25 acres of land. Other features include a wine cellar, spa, and four garages. The property bears the name "Château Fleur de Lys."