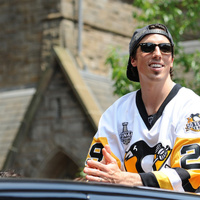 Marc Andre Fleury net worth and salary: Marc Andre Fleury is a Canadian professional ice hockey player who has a net worth of $50 million. Born in Sorel-Tracy, Quebec on November 28, 1984, Fleury is best known for playing as goaltender for the Pittsburgh Penguins and the Vegas Golden Knights of the National Hockey League. He stands at six feet and two inches and weighs in a 180 pounds. He was drafted as the first overall pick to the Pittsburgh Penguins in 2003 after playing in the Quebec Major Junior Hockey League. Prior to the National Hockey League, Fleury played for the Cape Breton Screaming Eagles and won both the Mike Bossy Trophy and the Telus Cup. He won the Stanley Cup with the Penguins in 2009 and earned the title of team MVP in 2011. He received a gold medal in the 2010 Winter Olympics and was a one-time NHL All-Star in 2011. He is married his long-time girlfriend Veronique LaRose in 2012. They dated since they were 15 years old. They have two daughters together.

Marc Andre Fleury started playing junior hockey in 2000 and has won two silver medals for Team Canada in the World Junior Championships. While playing for the Cape Breton Screaming Eagles he won the Mike Bossy Trophy for being the league's top prospect and was the top defensive player in 2003. In 2003 he was the #1 pick in the NHL Entry Draft by the Pittsburgh Penguins. He has played for Pittsburgh his entire NHL career. In 2009 he helped lead the Penguins in the Stanley Cup championship. In 2010 he won the gold medal for Canada in the 2010 Winter Olympics in Vancouver. Fleury is a goaltender and has earned the nickname "Flower" which is an English translation of his last name. He was the NHL Rookie of the month in October 2003 and named the Penguins' Tem MVP in 2011. He was also an NHL All Star in 2011. In international competition Fleury was named the World Junior Championships Top Goaltender and MVP in 2003. In 2017 Marc Andre Fleury moved over to the Vegas Golden Knights.