Louis Domingue played for the Gwinnett Gladiators of the ECHL and the Portland Pirates of the AHL. He was drafted #138 overall by the Phoenix Coyotes in the 2010 National Hockey League Draft. He played for the Coyotes from 2014 to 2018 and then joined the Tampa Bay Lightning. Louis Domingue was selected to the CHL Top Prospects Game in 2010 and had the best save percentage in 2012. Louis Domingue set a record for the longest win streak by a Tampa Bay Lightning goaltender with 11 in the 2018-19 season. 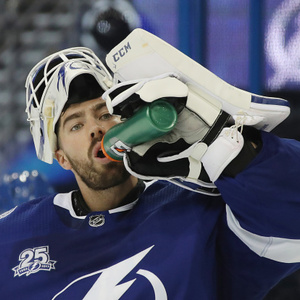