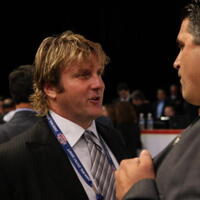 Len Barrie Net Worth: Len Barrie is a retired professional ice hockey forward who played 184 games in the National Hockey League and who has a net worth of negative $5 million dollars. Len Barrie was born June 4, 1969 in Kimberley, British Columbia and was drafted with the 124th overall pick in the 1988 NHL draft by the Edmonton Oilers. He played for the Philadelphia Flyers, Pittsburgh Penguins, Los Angeles Kings, and Florida Panthers. He is a former co-owner of the Tampa Bay Lightning. He is currently the president of the Victoria Grizzlies of the British Columbia Hockey League. Barrie was a real estate & resort developer in the Victoria BC area. At one time he was the major partner in the Bear Mountain Resort. The apparent success of the Bear Mountain venture prompted the NHL board of governors, on June 18, 2008, to approve the sale of the Tampa Bay Lightning to an investment group which included Len Barrie and Oren Koules. It was alleged that Lightning Owner's Len Barrie and Oren Koules began to disagree on team management issues that were believed to include NHL superstar Vincent Lecavalier being traded. This became such a problem that NHL Commissioner Gary Bettman had to intervene and have a meeting with the two owners. Both were given the opportunity to buy the other out. Neither exercised that option and the team was later sold to Jeff Vinik, a minority owner of the Boston Red Sox. The development of Bear Mountain resort has been criticized for damaging sensitive ecosystems and historic native sites. Currently, the Bear Mountain resort is under court protection from creditors.