Kris Letang net worth: Kris Letang is a Canadian professional hockey player who has a net worth of $40 million. Kris Letang was born in Montreal, Quebec, Canada in April 1987. He is a defenseman who first played for the Val-d'Or Foreurs in the QMJHL. Letang was drafted #62 by the Pittsburgh Penguins in the 2005 National Hockey League Draft.

He has played for the Penguins his entire NHL career since 2006 and also played for the Wilkes-Barre/Scranton Penguins of the AHL. Letang also represents Canada in international competition and won Gold Medals at the 2006 and 2007 World Junior Championships and a Silver Medal at the 2006 IIHF World U-18 Championships. Letang won a Stanley Cup with the Penguins in the 2008-09 season and was voted an All-Star in 2011 and 2012 and was a Second Team All-Star in 2013. In 2013 he signed an eight year deal with the Penguins for $58 million. 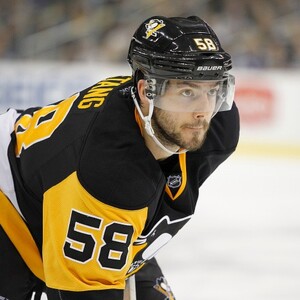