Jose Theodore Net Worth: Jose Theodore is a Canadian professional hockey player who has a net worth of $41 million. Jose Theodore was born in Laval, Quebec, Canada in September 1976. He played for the St-Jean Lynx and Hull Olympiques in the QMJHL and the Fredericton Canadiens in the AHL.

Theodore was drafted #44 by the Montreal Canadiens in the 1994 NHL Draft. He played for Montreal until the 2005-06 season when he joined the Colorado Avalanche. Theodore joined the Washington Capitals and signed a two year deal worth $9 million in 2008. He spent a year with the Minnesota Wild before signing a two year $3 million deal with the Florida Panthers in 2011. Theodore is currently an unrestricted free agent. He won the Ford Cup, Guy Lafleur Trophy, and President's Cup in 1995 in the QMJHL. In 2002 Theodore won the Vezina Trophy, Hart Memorial Trophy, Roger Crozier Saving Grace Award, and was named to the NHL Second All-Star Team. He played in the NHL All-Star Game in 2004 and won the Bill Masterson Memorial Trophy in 2010. Theodore has competed internationally for Canada and won a Gold medal at the World Junior Championships in 1996. 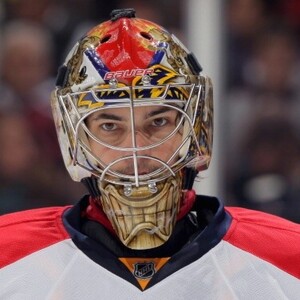