Jonathan Toews net worth and salary: Jonathan Toews is a Canadian professional ice hockey player who has a net worth of $26 million. Jonathan Toews was born in Winnipeg, Manitoba, Canada in April 1988. He is a center who shoots left handed. Toews was drafted #1 overall by the Tri-City Americans in the 2003 WHL Bantam Draft.

He chose to play midget AAA hockey instead and then played for two seasons at The University of North Dakota. Toews was drafted #3 overall by the Chicago Blackhawks in the 2006 NHL Entry Draft. He made his NHL debut in 2007 and has played for Chicago his entire professional career. As a member of the Chicago Blackhawks he has won Stanley Cup Championships in 2010, 2013, and 2015. In 2010 he won the Conn Smythe Trophy and was the second youngest to do so. He was the youngest person to join the Triple Gold Club at just 22 years and 41 days old. Toews is one of only six players that have won Olympic Gold and the Stanley Cup in the same year. He won the Frank J. Selke Trophy in 2013 and was a member of the 2013 NHL Second All-Star Team. Competing internationally for Canada he has won Gold medals at the 2010 and 2014 Winter Olympics, 2007 World Championships, 2006 and 2007 World Junior Championships, and 2005 World U-17 Hockey Challenge. In 2009 he signed a five year deal for about $6.5 million a season. In 2014 he signed an eight year deal with an average annual salary of $10.5 million. 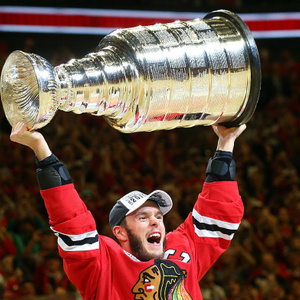