Johnny Oduya net worth: Johnny Oduya is a Swedish professional hockey player who has a net worth of $7 million. Johnny Oduya was born in Stockholm, Sweden in October 1981. He is a defenseman who played for the Hammarby IF, the Moncton Wildcats, the Victoriaville Tigres, Djurgardens IF, and Frolunda HC. Oduya was drafted #221 by the Washington Capitals in the 2001 National Hockey League draft. He played for the New Jersey Devils from 2006 to 2009 and then for the Atlanta Thrashers from 2009 to 2011. Oduya played for the Winnipeg Jets in the 2011-12 season and has played for the Chicago Blackhawks ever since. He also represents Sweden in international competition and won a Silver Medal at the 2014 Winter Olympics and a Bronze Medal at the 2009 World Championships. He has won two Stanley Cup Championships with Chicago. 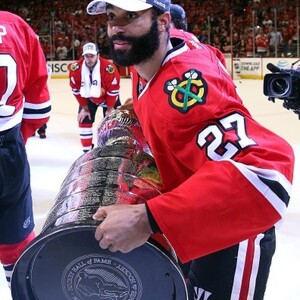