Johan Franzen net worth: Johan Franzen is a Swedish professional ice hockey player who has a net worth of $6 million. Johan Franzen was born in Vetlanda, Sweden in December 1979. He is a winger who shoots left handed. Franzen started playing hockey in Sweden and played for Tranas AIF from 1999 to 2000.

He then played for Linkopings HC from 2000 to 2005. Franzen was drafted #97 by the Detroit Red Wings in the 2004 NHL draft and has played for Detroit his entire career. He signed a three year deal worth $2.8 million in 2006. In 2009 Franzen signed an 11 year extension with the Red Wings for $43.5 million. He won a Stanley Cup with Detroit in 2008 and was named Detroit Red Wings Rookie of the Year in 2006. Franzen holds an NHL record for scoring nine goals in a four game playoff series. He also holds several Red Wings records including most goals in a playoff series, most game winning goals in one month, most goals in a single playoff year, and most points in a playoff game. Franzen also represents Sweden in international competition and won a Gold medal at the 2006 World Championships. 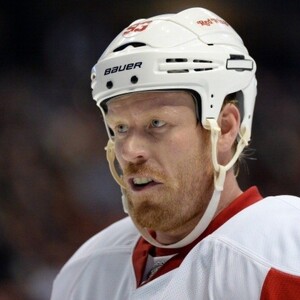