Joe Vitale net worth: Joe Vitale is an American professional ice hockey player who has a net worth of $2 million. Joe Vitale was born in St. Louis, Missouri in August 1985. Vitale is a center who won three state championships and had two undefeated seasons for Christian Brothers College High School.

He played for the St. Louis Jr. Blues in the Central States Hockey League and the Sioux Falls Stampede of the United States Hockey League. Vitale was drafted #195 by the Pittsburgh Penguins in the 2005 NHL Entry Draft. He then played for the Northeastern University Huskies and was named Hockey East Rookie of the Week and won the Ed Arrington Memorial Rookie of the Year Award. Vitale signed a one year deal with the Penguins in 2009 and made his NHL debut in 2011. He was re-signed for a two year deal worth $1.1 million in 2012. In 2014 Vitale was a free agent and signed a three year deal with the Arizona Coyotes. 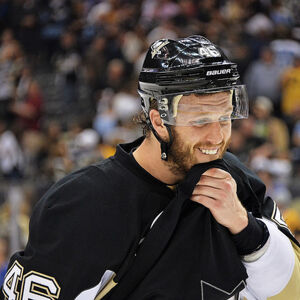