Joe Thornton Net Worth: Joe Thornton is a Canadian professional hockey player who has a net worth of $60 million. Joe Thornton was born in London, Ontario, Canada in July 1979. He played minor hockey for the St. Thomas Travelers and won an Ontario Minor Hockey Association championship. He played for the Elgin-Middlesex Chiefs in the Minor Hockey Alliance of Ontario.

He also played for the St. Thomas Stars and Barrie Colts, and Sault Ste. Marie Greyhounds. He won OHL and CHL Rookie of the Year honors. Thornton was drafted #1 overall by the Boston Bruins in the 1997 NHL Draft. Due to the NHL lockout in 2004-05 Thornton went to play for HC Davos in the Swiss National League. He re-signed with the Bruins for a three year deal worth $20 million. The same year he was traded to the San Jose Sharks where he later signed a $21 million deal. In 2006 Thornton won the Hart Memorial Trophy for MVP, Art Ross Trophy, and was named to the NHL First All-Star Team. He played in the NHL All-Star Game in 2002, 2003, 2004, 2007, 2008, and 2009. Playing internationally for Canada Thornton won Gold at the 2010 Winter Olympics, 2004 World Cup, and 1997 World Junior Championships. He is currently the Sharks all-time leader in assists and is the third player in NHL history to have back-to-back 90 assist seasons. 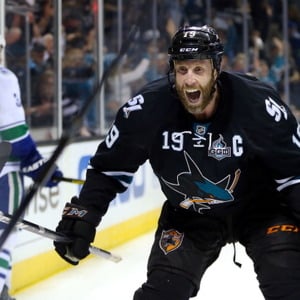