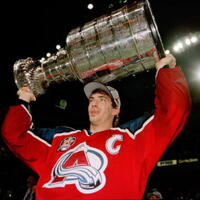 Joe Sakic Net Worth: Joe Sakic is a Canadian retired professional hockey player who has a net worth of $60 million. Joe Sakic was born in Burnaby, British Columbia, Canada in July 1969. He played hockey as a youth in Burnaby and played for the Lethbridge Broncos in the Western Hockey League. He was Rookie of the Year in the WHL and was named WHL Most Valuable Player and Canadian Major Junior Player of the Year. Sakic was drafted by the Quebec Nordiques as the #15 pick in the 1987 NHL Draft. The Nordiques relocated and were renamed the Colorado Avalanche for the 1995-96 season. Sakic played his entire career for the Quebec/Colorado franchise. He was named captain of the team in 1992. He won Stanley Cup titles in 1996 and 2001 and was the most valuable player in the 1996 playoffs. He was named MVP of the NHL in 2001 and played in 13 NHL All-Star Games. Competing internationally for Canada Sakic won Golds at the 2002 Olympic Games, 1994 World Championships, 2004 World Cup, and 1988 World Junior Championships. Sakic retired in 2009 and his jersey was retired by the Avalanche. In 2012 he was inducted into the Hockey Hall of Fame. Joe was inducted into the Canada Sports Hall of Fame in 2013. After retiring he served as executive advisor and alternate governor for the team before being promoted to Executive Vice President of hockey operations in 2013.