Jeremy Roenick Net Worth: Jeremy Roenick is a retired American professional ice hockey player who has a net worth of $37 million. Born in 1970 in Boston, Massachusetts, Jeremy Roenick was first drafted eighth overall in the 1988 NHL Entry Draft by the Chicago Blackhawks. He made his debut with the team against the New York Rangers in October of 1988 and had a bunch of success with the team before the Blackhawks traded him to the Phoenix Coyotes ahead of the start of the 1996 season.

He played with the Coyotes until 2001 when he signed a free agent deal with the Philadelphia Flyers. Roenick was traded to the Los Angeles Kings following the 2004-05 NHL lockout; he returned to the Coyotes on a one-year deal after a single season in Los Angeles. After finishing his season with the 'Yotes, Roenick landed a one-year contract with the San Jose Sharks, where he scored his 700th career assist. He announced his retirement on August 6, 2009, with 513 career goals and 703 assists in 1,363 games. Over the course of his career, he played in nine NHL All-Star games and was inducted into the U.S. Hockey Hall of Fame in 2010. Roenick has always been very outspoken, which has often led to off-the-ice controversy for the outstanding player. Since his retirement, he has been heavily involved with hockey media, appearing on NBC and TSN. He has two children with his wife, Tracy, and lives in Scottsdale, Arizona. 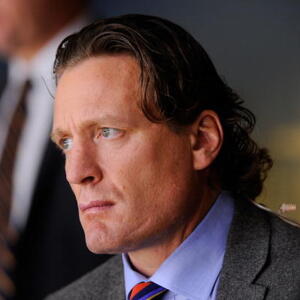