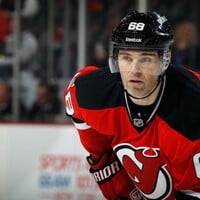 What is Jaromír Jágr's Net Worth?

Jaromír Jágr is a Czech professional ice hockey player who has a net worth of $50 million. For many years Jaromir Jagr was the highest-paid NHL player of all time in terms of career earnings. Jagr's $127 million career earnings total was topped by Sidney Crosby in June 2021 when Crosby's earnings hit $129 million.

He established a stellar reputation for himself in the NHL, playing for teams like the Pittsburgh Penguins, the Washington Capitals, the New York Rangers, the Philadelphia Flyers, the Dallas Stars, the Boston Bruins, the New Jersey Devils, the Florida Panthers, and the Calgary Flames. He became integral to both the Penguins and the Rangers, captaining both teams.

He has left the NHL twice, first in 2008 and then again in 2018. On the first occasion, he went from the Rangers to Avangard Omsk of the Kontinental Hockey League. After returning for another stint in the NHL, he eventually left the Flames in 2018 and joined HC Kladno in Czech. He serves as president of the team, a position he inherited from his father. In 2021, it was reported that Jágr was still playing hockey as he approached his 50s.

Only Wayne Gretzky scored more points in the NHL, which makes him the highest-scoring European player of all time. As you might expect, he is also considered one of the best hockey players that the world has ever seen. Not only was he the youngest player in the NHL when he joined at age 18, but he also went on to become the oldest player in the NHL when departed at age 45. Even at this advanced age, Jaromír was scoring hat-tricks – something no one else his age has ever done in the NHL.

Jaromír Jágr was born on February 15th of 1972 in Kladno, Czechoslovakia. He began skating at the age of three and quickly exhibited a natural talent for hockey. By the age of 15, he was playing at the very highest level in Czechoslovakia for his hometown club, HC Kladno. His father previously served as the president of the team before his passing. By the age of 17, he had earned a place on Czechoslovakia's national team. During these early years, Jaromír came to detest the communist rule of the Soviet Union. He reportedly kept a picture of Ronald Reagan in his notebook, and he never forgot the day that his grandfather was imprisoned by the communist government. His grandfather had fought back against efforts to "redistribute" his farm.

In 1968, Jágr's grandfather died in prison. This is why he wears the number 68, and he was even granted special permission to wear this number by the GM of the New Jersey Devils, who usually forbade anyone from wearing a number higher than 35. With all that said, Jaromír has stated that he does not hold any ill feelings towards Russia, but rather the general ideology of communism. To this day, he holds conservative views, and he has close ties with the liberal-conservative Civic Democratic Party in Czech. 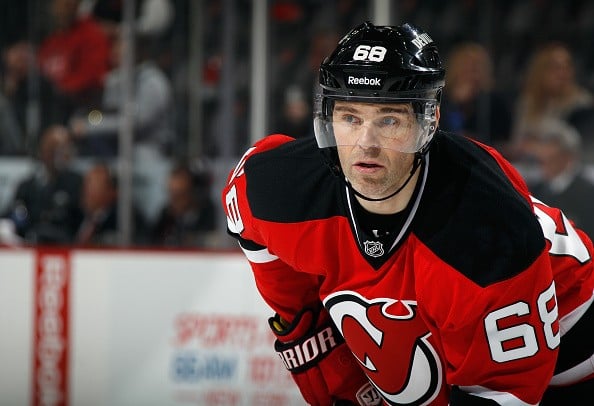 By the age of 18, Jaromír was drafted by the Pittsburgh Penguins during the 1990 NHL Draft. He was the first Czechoslovak player to join the NHL without first having the "defect," as the Iron Curtain was already falling by this point. He immediately relocated to North America following the draft and became an integral part of his new team. Almost right away, the Penguins won two Stanley Cups in 1991 and 1992, and Jágr became one of the youngest players to score a goal at the finals.

By the 1994-1995 season, Jágr had won his first Art Ross Trophy with 70 points. Next season, he scored 149 points, which was a new record for a European player. By the 1997-1998 season, Jágr had become the new captain for the Penguins. He went on to win four consecutive NHL scoring titles, and during this period he also won the Hart Memorial Trophy. In 1998, he also led the Czech Republic to a gold medal at the Winter Olympics.

Due to frictions caused by Lemieux, who had returned from retirement, Jágr was traded to the Washington Capitals in 2001 after scoring more than 1,000 points for the team. Unfortunately, Jágr struggled to find his scoring touch throughout this entire period, and he was traded to the New York Rangers in 2004. He performed better in New York, although injuries hampered his performance. By 2008, he had departed from the NHL entirely in order to play for Avangard Omsk. However, he returned to the NHL in 2011 and signed with the Philadelphia Flyers. He quickly became one of the top scorers in the NHL by the start of the season.

By 2012, he had signed a new deal with the Dallas Stars. He was then traded to the Boston Bruins, but they did not offer him a new contract by the end of the season. In 2013, he signed a new deal with the New Jersey Devils and played with them for two years. He then spent another two years with the Florida Panthers. During his time in Florida, he continued to score and pass a number of important milestones. In addition, Jágr proved to be a valuable leader for the team. Jaromír then spent one year with the Calgary Flames, retiring in 2018 amidst various injury concerns.

For many years, Jaromír Jágr was the highest-paid NHL player of all time in terms of career earnings. Jágr's $127 million in career earnings was eventually topped by Sidney Crosby in June of 2021 when Crosby's earnings hit a total of $129 million. In 2001, the Capitals signed him to a seven-year, $77-million contract. This was the largest contract the NHL had ever seen.

Jágr has struggled with notable financial issues over the course of his career. In 2003, a story broke that suggested Jaromír owed $950,000 in gambling debts. The story was leaked by the owner of a gambling website in Belize, to whom Jágr owed $500,000. The report stated that Jaromír stopped paying his monthly payments on the debt, causing the owner of the website to go public and leak Jágr's gambling problems to the press.